Clicking through my email, there was an email got my attention. It was dispatched from Jan, the literacy facilitator. I was sitting in the classroom with my best friend at night. Obviously, it was the most comfortable place to study for us. I nudged my friend, asking her, was she going to participate. I was planned to participate in Junior General Assembly 2, since it would be my first time. There were many committees in the whole MUN conference; the scariest one is the Security Council. I was really exciting to see what were the topics, and the students from my school who were interesting in my favorite committees. Three topics were encompassed my committee. Link to access: http://isppmun.tumblr.com/ 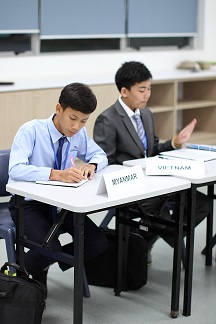 You had only one month and a half for preparing all your country’s information, and I’d been trying so hard to make all my research done. I was the delegate of Myanmar representing the country in Southeast Asia in my whole committee. There were other Asian countries, Middle East countries, and other countries from other continents. I was pressured because one of the topics were giving a hard time to my country’s position which was the question of “deforestation in Southeast Asia.” Anyway, I got help from other countries including China and European countries as a co-submitter and main submitter in the resolution. I had a lot of fun times and stressing moments working with my other friends during the lobbying time. I mean, it was a great opportunity to meet, make, and communicate with new friends.

Out of the whole conference, I liked to work with the delegate of China; he was so friendly, and the start of the conference, we started to communicate with each other immediately. We’d been so friendly and supportive to each other since it was our first times being participants. During the debate, we yielded the floor between each of us; we asked tough questions; we talked through notes. The presidents were also friendly and simultaneously humorous because they were trying to create fun as much as possible. After each debate, we took a break; some people talked to the presidents and each other. As an overall, the whole conference was looking so much alive.

Personally, if I didn’t participate this specific type of event, I couldn’t believe myself to get to know much world’s problems and information like this. I felt proud of myself for taking this risk in order to let me push through my limit. I couldn’t imagine that I could voice myself to raising an awareness and solutions in each problems. I knew that I had to continue my journey with this type of passion because it’s a good trade with my brain whose inept with the world updates. Thanks to ISPP for hosting this conference, and thanks to all the people who were being friendly even though this conference was serious throughout the whole time.