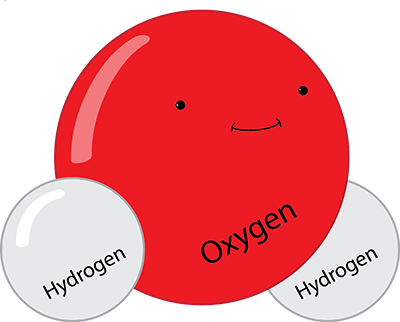 In our STEM class and those of you who doesn’t STEM, is standing for Science, Technology, Engineer and Math. So in this class, we learned and focus on one science called “Water.” As we know that atoms are the building blocks of all material in and on earth. This is the atomic structure.

As the diagram shows in the middle of the atom, we call it “Nucleus.” It is the core of the atom that have “Protons” and “Neutrons” inside it. Protons is with the positive charge and Neutrons with no charge. But the outside wall of the atom has “Electrons” and with the negative charge. For extra information, The number of protons always equals to the number of electrons. Atoms react with other atoms is to become more stable forming compounds. For example the H2O is the compound of water.

So, this is a focus of water and this is the diagram shows about the water compound of how each element reacts and combine to form a compound.

As the diagram shows the hydrogen only had one electron and one proton. Inside the nucleus of oxygen there eight protons and eight neutrons and the number of electron of the first orbit is two, so it’s fine. But on the second orbit of the oxygen atom there are only six electrons and that is meaning it needs two more electrons. So, the other two hydrogens come and share their electrons to the oxygen’s electrons because hydrogen is only had one electron. Finally, it forms a water compounds.

The place that both type of atoms, hydrogen and oxygen call “Covalent Bonds.” It is a very strong bond when they connected to each other. For the negative sign side and positive sign side is called “Polarity” and means it had both positive and negative. Source from the diagram the oxygen had a negative pull and the hydrogen had a positive pull. So, it attracts to each other like a magnet.

I learned a lot about the science of water but there’s a question, Why Life Require Water? There are four points why life requires water.
A good solvent – it means it can dissolve material. For example, Dishes.
Ice float – less dense (if ice sinks to the bottom of the lake. The ice will freeze down there soon all the water will form ice.
High heat capacity – it is how water heated up required a lot of energy. Also it takes a lot of energy when it cools down.
Metabolism – Our body needs water to break down food, so when you eat food it helps to digest.

There’s also a question why water polar? The reason why water polars because in the oxygen of water molecule, there are eight protons and the electrons on the last orbit only have six, so it’s not stable. So the other two hydrogens is sharing with each other. Now, it had ten electrons. Let the oxygen has eight protons and ten electrons. So the electron is stronger than the proton and it’s like the gravity is pulling down to connect with each other. It’ like they batteries can connect with each other only negative and positive goes together.