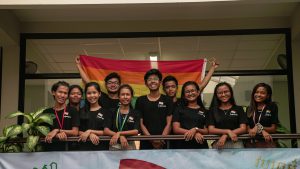 After the gender summit, Change, happened last year (2018), another summit had happened this year: Rainbow summit or In-tha-nu. This time the summit is a student-led project, consisting of eight members, working together for over a month. Rainbow is a summit that helps to advocate the LGBTQ+ community and disseminate the message and information from the community to many Cambodians across the country. In Cambodian society, addressing the problems of LGBTQ+ people is very sensitive. There are still many young individuals who live in various provinces are still lacked with information of the LGBTQ+. Because of this, it leads to countless assumptions, discrimination, violation, and exploitation. Therefore, the Rainbow summit aims to “encourage people to provoke meaningful discussion, to embrace differences, and to inspire Cambodian youth to create positive change in their own communities.”

I am one of the members of the Rainbow summit. There are four distinguished topics that cover many problems which are LGBTQ+-related: Language, Culture, Politics, and Health & Violence. I am one of the two session leaders responsible for presenting the latter topic. During the process of organizing the summit, all members have learned and discussed the common LGBTQ+- 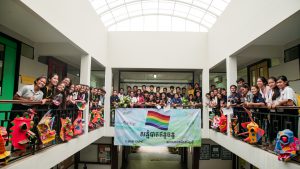 related problems in Cambodia. Each week, we met each other to research, read over many texts, and discuss for the better comprehension of chosen topics. Of course, there were many confusions, questions, and difficulties during the discussion of our meeting. For example, we tried to understand what cisgender really means and translated English words of different sexualities into our language, Khmer. However, these challenges the team went through actually empowered everybody to keep being persistent and channeling against their difficulties.

On the summit day, the team was prepared to share what they have. It was the day for everyone to finally feel that they can change the world. Establishing momentous conversations, participating in powerful activities, and listening to educational information were moments of enlightenment. One of my highlights of the day was the activity I led, Imagine How You Would Feel. This is

the activity that allows participants to understand the feelings and pressure of homosexual people, especially the LGBTQ+ people. The reaction I received from the audience was inarticulate. I could sense the heartbeat of the people fastening and echoing every faucet of the room. There were gasps, tears, and silence. That Silence was the moment that hinted me that they completely understood. It was the moment where I can find light in the darkness.

To be honest with you, I do not want this day to end at all. I want to sit with the participants all day, talking about anything. Unfortunately, it ended, but I believe that what the people have learned that day will innate their mind forever. It is not just us who organized the event are the change agents. They are too.