Do you want to hear a fabulous new from this trip?! You guess it. We finally surveyed our block! We were extremely excited and again, ready to rock and roll! Ordinarily, MCC had always organized the schedule for us when we are there, but this time and from now on, we take the initiative to make our own. To be honest, I feel that this trip is the most productive trip we ever had. I personally learn a lot from this trip.

Here are the three day summaries written by all of us when we were there.

Day 1: “Learn from mistakes and failures.” 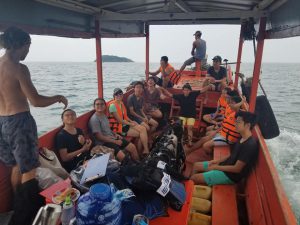 LMRT’s back on the island! Not eight students but 11 (including three younger students from Liger!) Everyone was excited to be back again and, for some of us, for the first time. We started our first work day by surveying our first deployed artificial reef block!

Here are what we learned.

Life goes on no matter what; same with our project! Things didn’t go as expected, but it is all about how we response to and learn from it, like we did today.

Day 2: The Liger Marine Research Team was finally able to conduct his survey this morning at our old artificial reef site; the visibility was still not the best, but it was at least good enough to see some species. We saw a burst of biodiversity at our survey site; there were a lot of java rabbit fish, black spot snappers…. there was even a huge grouper!

From one of newbies: We had a fun snorkel this afternoon and saw many types of fish. We saw two long-beaked coral fish along with many other cool ones that we don’t know the name of (yet…) 😉 particularly the big ones under the pier. We also saw our very first seahorse (there were two of them)! But we were a bit scared by the sea urchins 😛

To end the day, the whole group did a beach cleanup and collected 60kg of trash in an hour. Well done, team!

Day 3: We hope everyone is having a great weekend so far; we definitely are! At 6 am, bright and early, two teams took off to do a boat-based dolphin survey–with the assistance of our younger LMRT members–and a reef survey, conducted by the older LMRT members with MCC’s facilitation.

After hours of searching through the binoculars, the dolphin team finally spotted 7 individuals! Two were traveling together while others were diving individually and exhibiting a variety of behaviors.

Meanwhile, under the water, the surveyors were roaming along their 100-meter transect line scanning for fish, invertebrates, and substrates. Fortunately, the visibility was decent enough for them to conduct a baseline survey in the afternoon at their soon-to-be second artificial reef site.