This was a small research we did during our “sound waves” study in physics class. Our facilitator, Samantha, assigned us many different topics to research on with the purpose of dot-connecting our lessons to the world information.

BY: VENGHOUR THAN & SAMNANG HOR

Bats are found all around the world and there are hundreds of different species of bat. These bats are living in caves and forest, mostly in the Southern Hemisphere. Bats are mammals that have fur or hair covered their bodies and are warm-blooded. Bats are the only mammals that can fly, it’s wing has a very similar bones to our human hand and arm, connect the skin that stretched between long finger bones and the body to form the wing membrane. This mammals hunt at night by using their exceptional sight to pick out their preys. Bats prey such as insects, frogs, and small rodents. Bats have a slight sixth sense known as echolocation to locate prey by the sounds that are reflected back to them.

The use of sound waves combining with echoes is called “echolocation.” It is to determine the location of the objects are in space mostly at night. Bats are the most standout mammals that use echolocation to navigate and find their food since they are blind. Bats’ uses of echolocation are the same as humans’ uses of eyes to see. Its process of using sound waves and echoes to survive every day is very complicating. But do not get it wrong here, there are others animals having the ability to use echolocation for the same reasons of navigation and food searching including dolphins, whales, other birds and even humans.

The Process of Bat’s echolocation

In order to echolocate, the bat is required to have three essential things: voice, ears, and echoes. Echo is “a sound or sounds caused by the reflection of sound waves from a surface back to the listener.” Down here is the picture of bat’s ear. First of all, the bat will let a chirp (ultrasonic sound); as the sound waves reach the targeted object, it will bounce back as echoes reaching back the bat’s ear. Now, the echoes will pass the ear cartilage into the ear canal. Then, it continues its way to the eardrum where it starts to vibrate, and that vibration will pursue its way to cochlea until the basilar membrane. 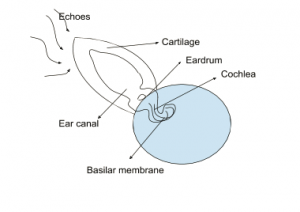 In brief explanation, the vibration from the ear canal cannot be transported to the basilar members; it had to go through a conversion. It is all happened in the “cochlea.” If you look at the diagram down below, it is explaining how the cochlea works. When the vibration approaches the cochlea, it instantly converts into nerve impulses. Nerve impulses are the smooth flows of vibration. Then, those impulses transport to the brain for interpretation. 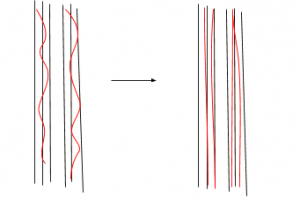 Since bat does not live in the space with one object, it had its owns technique of knowing multiple of objects at the same time. To do so, the bat had to chirp for several times with distinguished frequencies in a different location. Therefore, when the echoes reach back its ears with different frequencies, it can figure the destination, sizes, and shapes.

Bat is a very special kind of animal among the others with the ability of echolocating. The object’s location, size, and shape can be figured out by its chirp. In addition, by letting a chirp, the bat can produce and hear the sound at the frequencies over 100,000 waves every second. With its complex and amazing life survival skill, it is actually the birth of many modern sonar technologies.