Game design was where it came to meet my skills. I love to design; it is a skill that I think I’m good at. This was a three round exploration meaning that it went through three times of rounds of the school year schedule. I was on the last round with the other four friends who had similar skills as mine. I did really enjoy working in small team where it’s easy to communicate and collaborate. The style of the game was already planned since the first round team; it was decided to focus in one main theme, “climate change.” 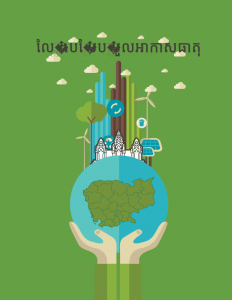 I can sense that the argument of the existence of climate change is really controversial. For myself, I do think it’s existing in this contemporary world. Therefore, it was a wise decision to educate people through our game of climate change, especially this country, Cambodia because there aren’t a lot of people including students, adults, and kids know about the updates of the world such as this problem. I expressly felt that this was an opportunity for me to be a change agent to change my country and others in the term of education people with creativity. It was an honor to be part of the member which I could distribute all of my thinking and dedicate my passion through this exploration. Furthermore, seeing my country changes little bit by little bit; it is an evolution.

To illuminate people’s mind with the idea of the game, it is game that had similarity to another board game called “Pandemic.” Personally, I could say that it’s confusing. It’s confusing to play, to understand, to have fun, and to share the instruction to others, but it’s still a good, developing game. We thought of how to implement this game to many government school throughout Cambodia as much as possible. One solution was encompassing a new feature to the game of establishing Q and A cards (Question and Answer cards). The Q and A cards will include all the questions from the government textbooks in each grade. Hence, students can play with the knowledge of their grade.

Currently, we didn’t have any budget to print out the board game, but we started to write a formal paper and submit it as a grant. I positively felt that there will be someone or enterprise willing to donate their budgets for this amazing and mind blowing project. There were a lot of inputs of great effort and determination from students and facilitators who willing to work really hard and smart in order to make this happen.